Last time, we talked about how you can use sounds to give your stories that special bang (

). If you haven’t read that post yet, check that out here! This week, we’ll be talking about how you can use numbers in your stories. Keep an eye out for future installments in this series!

When they are used properly, statistics can make an impression on your audience. When they aren’t, they can bore your audience and take the focus away from your main points. So, the question is…how can you present your numbers in an engaging, fun way?

Well, one thing you should always do leading up to your main point in your story is set the scene. Introduce your characters, paint the background, and describe the time everything is taking place. The same thing applies to using numbers in your presentation!

When you’re preparing to give an informative speech and you find a shocking statistic, you can use it in your opening. A particularly surprising number can be a hook in itself. But in the context of telling a story, numbers may seem a little  counterintuitive. Don’t be fooled; they’re a surprisingly underrated tool that you should consider adding to your arsenal.

Here are my top 5 ways to make numbers in your storytelling more appealing: 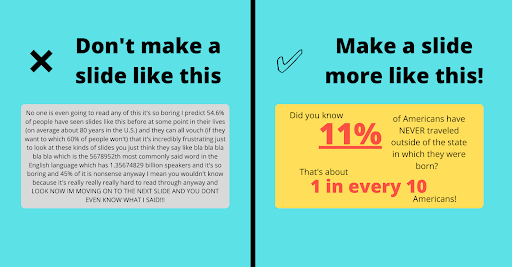 Mastering the art of using numbers to make a point can come in handy when giving speeches of any breed: persuasive, informative, or entertaining. The next time you write or tell a story, think about whether you could use any of these methods to add some interesting numbers into your speech.

By now, you probably know the drill! Next week, we’ll be going over part 2 of this same topic: storytelling with numbers. Then we’ll move on to the next installment in this series, where I’ll go over another tool you can use in storytelling speeches! See you next time. 🙂

To continue reading this article or receive future blog articles when they are posted, please subscribe.  Please note that we take your privacy seriously and do not share your details with anyone! If you are interested in our ebook, please check out "Public Speaking for Kids - An Illustrated Guide!"