Today, we’ll be looking at Part 3 of our last two blog posts.

Sandeep and I just stared at her. “What?”

The queen looked a bit unnerved now. “You are humans, yes? Shelldon has completed his objective?”

We shrugged and looked at Shelldon. Turning to his queen, he replied, “Yes, My Queen. These are two human children, just as you asked.”

“Ah.” The queen said. “So I presume the confusion is in why I requested their presence. Well, judging from their lack of other questions, you have filled them in on basic information about Mutia.” Shelldon nodded in confirmation.

“Now, for the real reason you’re here. Listen up! You too, Shelldon, this is classified information that I haven’t revealed before.”

Shelldon, looking a bit surprised, as well as a little indignant that the queen hadn’t confided this in him before, perked up.

“Over the last few years, our planet has been experiencing a gradual decrease in our natural supply of the magical substance rewpod. And it’s come to our attention there’s an almost endless supply of it on Earth, distributed among places you humans call “beaches” and “deserts”.”

“What do you mean, rewpod?” I asked her. “Beaches…deserts…do you mean…sand? Like, crushed shells sand? Like sandcastles and…the ground sand?”

“I’m not sure what you call it on Earth, but it resembles a fine yellow-brown powder that ranges from almost white to nearly black.”

“Yeah, sand!” Sandeep exclaimed. “You’re looking for sand! But what would you need it for?”

Shelldon glanced at the queen, who nodded in approval, before replying. “Unlike on Earth, Mutia is a very eco-friendly planet. All of our technology- from transportation, devices, and construction- relies on the power of rewpod. Earth’s sand is much more plentiful and much more efficient than Mutia’s- but we didn’t need to risk taking it from your planet until recently, when my advisors alerted me that our supply has been decreasing more and more rapidly in recent years, much faster than we had expected a few years back. This is most likely because of all the new technology that was invented due to several scientific breakthroughs. 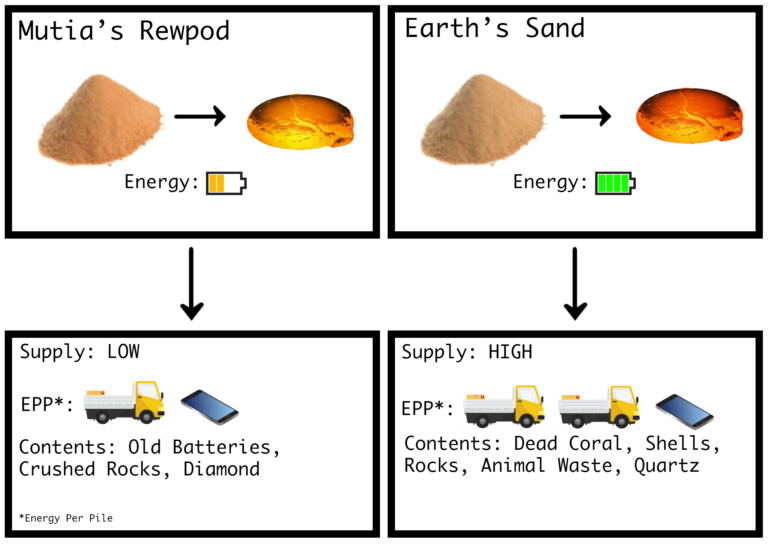 My brother and I exchanged confused looks. Sandeep spoke up. “Okay, so your kind needs our sand…why not just take it from the beach? You sent Shelldon to go there without any problems…I guess what I’m asking is, what do you need us for?”

“Well, since not many of us Muitaps happen to be able to assume, or already have, forms that are as easy to hide as a hermit crab, not many of us are fit for this job, it’s rather rare to find someone like Shelldon who qualifies with both of the criteria. So, my advisors and I reasoned it would be easier to hire some human children to help instead. Our plan had been to get two children who were just far enough from their parents, and who looked amiable enough to cooperate, but it just so happened that Shelldon stumbled upon you two!”

“Here you are…two of our finest models of rewpod collectors.” She held out to us what looked like…two large metal buckets. Seeing our disappointed faces, she added that the buckets were bottomless and collected the rewpod without needing much manual labor, and that cheered us up considerably. Armed with the buckets, we walked over to Shelldon and the familiar purple enveloped us. A minute later, we were awake, on the same beach we had been on but a few hours earlier. Within a few seconds of setting the buckets down, sand started flying into the bucket. Much to our amazement, the entire process was completed within seconds, and none of the people around us noticed anything strange.

Finally, it was time to say goodbye. Shelldon, in his tiny crabby way, seemed a little sad to leave us.

“You’re good kids. Mutia owes you one, so if you ever need anything, just use this.” With those words, he held out a small, gray, unassuming rock. Its only unique feature was the small, finger-sized indent in its very middle.

“How do we use it?” I asked Shelldon.

“Put your finger in the little indent, and say my name and imagine me being here. It won’t work immediately but I will know to come if you do it correctly.” he looked down at a small panel on his claw. By tapping the buckets, they shrunk down to his size, after which he promptly tucked them in a seemingly invisible pocket under his right claw. “All right, gotta go now. It was nice to meet you two.”

“Bye, Shelly!” We waved excitedly, though with a little sadness, while we watched Shelldon produce a hazy purple circle around him, and start to disappear.

“Sandeep! Snigdha! Time to go!” our parents called. Smiling at each other, we raced back to them. My mom, turning to us, asked, “What were you doing over there? You seemed to be having so much fun!”

We both blinked. Sandeep decided to answer for both of us. “We had a space adventure! With aliens!” I took a quick breath in. It wasn’t a lie, but would the hidden meaning go undetected?

As we left the beach, and piled into the car, my parents began to talk in the front row. But in the back row, my brother and I just sat and beamed together. Sometimes, you don’t need words to communicate.

Based on a true story…?

This story was an example of a tall tale, so next post we’ll be taking a deeper look into tall tale speeches!

To continue reading this article or receive future blog articles when they are posted, please subscribe.  Please note that we take your privacy seriously and do not share your details with anyone! If you are interested in our ebook, please check out "Public Speaking for Kids - An Illustrated Guide!"